Bearcats Baseball Team Off to a Good Start 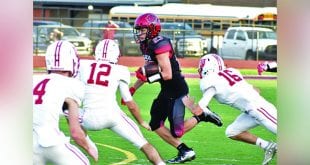 Bearcats begin with a blowout

The Mena Bearcats baseball team has begun their 2019 spring campaign with a record of 2-1. Mena recorded close wins over Waldron and Mount Ida, while dropping a 16-8 decision to Elkins on Friday afternoon.

Elkins scored two runs in the top of the first inning on Friday and never trailed in the contest. Trailing 6-1 in the bottom of the fourth, Mena put three runs on the board to cut the Elkins lead to 6-4. But Elkins plated six runs in the top of the fifth to extend the lead to 12-4. Mena scored four times in the bottom half of the fifth to pull to within 12-8, but Elkins added four insurance runs to pull away for the 16-8 win Friday at Union Bank Park.

The Bearcats pounded out seven hits on the afternoon. C.J. Brown had two hits and two runs batted in. Brown Blake, Kyndon Schuller, Austin Rose, Mason Brotherton, and Blake Castor had the other Mena hits. Brown and Castor also knocked in two runs each.

Austin Rose, Riley Gilbert, Ian Martin, and T.J. Kiser shared the mound duties for Mena. Martin was charged with the loss, as he was tagged with five unearned runs. The Bearcat pitchers surrendered only three earned runs on the day, as the Mena fielders were charged with 11 errors. The Mena pitchers combined to post six strike-outs and six walks.

Mena opened up the season on Tuesday, February 26th with a walk-off 4-3 victory over Waldron in a contest at Union Bank Park that went nine innings.

The game was tied at two after seven innings. Neither team could score in the eighth inning. After Waldron took a 3-2 lead in the top of the ninth, the Bearcats rallied in the bottom half of the inning for the 4-3 win. C.J. Brown doubled in the tying run. Kyndon Schuller knocked in Brown for the winning run with a single to left to start the Bearcats walk-off celebration.

Schuller had two RBI’s on the day, and was credited with the victory after pitching the ninth inning. Mason Brotherton started for Mena and pitched three strong innings. C.J. Brown and Ian Martin also saw mound duty in the victory.

On Thursday, February 28th, the Bearcats held on for a 5-4 win over Mount Ida at Union Bank Park.

The Bearcats scored three in the top of the first, and added single tallies in the fourth and sixth innings.

Schuller went the first four innings on the hill and was credited with the win. Sam Efird pitched the final three innings to chalk up the save. The two hurlers combined to fan ten Lions.

Up next for the Mena baseball team is a road trip to Mount Ida on Thursday, March 7th.  The Bearcats return home to Union Bank Park to host the Malvern Leopards on Friday, March 9th.