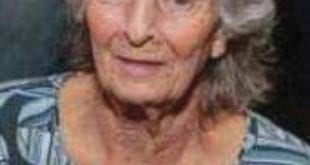 Wanda Purswell came to Mena as a retiree herself but has spent the last couple of decades tirelessly advocating for quality of life issues for local seniors and volunteering to improve the lives of others. Living true to the statement, “leave the world better than how you found it,” many can testify with first hand knowledge that Mena, and life for its seniors, is certainly richer than before Purswell discovered it. Retirement, for some, is about ‘kicking back’ and watching the world go by… but not for Ms. Wanda Purswell.

Wanda Purswell was born to Bert & Pauline Wyrick in Mt. Park, OK in January of 1938. She grew up the youngest of three children. Her father moved around quite frequently due to his job in the furniture business. In 1956, Purswell graduated in Odessa, Texas.

She met her husband A.J. Purswell in the beginning of 1956 and later married him in December of that year. Purswell was blessed with two daughters, Janet & Judy, who have in turn blessed her with five beautiful grandchildren and three great-grandchildren.

Purswell states she has had a full life and she and her husband have had “some really good times and laughs over the years.”

A.J. worked at Humble Oil (now Exxon), starting out in the oilfields and then eventually working his way up to the downtown office in Houston, Texas. Wanda on the other hand was a giftedly talented seamstress. She stated she made all of her daughters’ clothes and then when her husband went from the oilfields to the downtown office, she made his suit jackets. She said, “It put a stretch on our budget… and you cut every corner you could cut.”

In 1990, A.J. retired from Exxon and had a dream to ride motorcycles. After his retirement he bought one and rode thousands and thousands of miles, “going all over the place.” One of his roundabouts led him to Mena, Arkansas to visit some friends. They encouraged him to relocate here to this “green and mountainous area.” A few weeks later he returned with his wife, who promptly fell in love with the area. They moved soon after her retirement from Anderson Elementary School in Conroe, Texas. (March of 1996) where she had served as the school secretary.

The house they purchased was the well-known former “Ida Barrow” home on Hickory Street. The couple spent the next 3 years completely restoring this 2-story home from the early 1900’s and as she reminisced on the project and the years that followed, many treasured memories were made.  She explained that the restoration was “from top to bottom” with the exception of keeping the original hardware, woodwork and floors. One of the “true finds” of this home they were particularly proud of was 5 transoms windows that were revealed, indicative of the era in which the home was built.  Purswell explained these windows were an early device that allowed air to flow freely throughout the home. During the restoration, behind one of the walls, Purswell discovered a paper flyer from the Oklahoma territory selling land. She also found all sorts of colorful marbles in various sizes on the property. Purswell said that she has entertained several people over the years in her home. One such person was former Governor Mike Huckabee when they hosted a fundraiser for him.

After a few years living in Mena, Purswell joined a group in the process of raising funds to build the Senior Center. This same group a few years later helped to bring about the construction of “The Oaks,” an assisted living retirement community in Mena. Purswell volunteered as secretary for this group and expressed her pleasure and pride in both of these completed projects. Purswell officially retired from “The Oaks’ as of last week and was honored with a ceremony to honor her years of contributions and volunteerism.

When asked how long she has volunteered, she said “I always have as long as I can remember.” She and her husband are both currently volunteering at the Women’s Center at Mena Regional Health System. She helps with paperwork, answering phones and comforting people during family member’s surgeries. Purswell said “I am just a people person and I enjoy the good feeling I get when helping people.”

Purswell and her husband love living in Polk County. “People here are all just so friendly and I really do enjoy these mountains. We didn’t have mountains in Conroe, Texas. This is a beautiful area, truly it is.”